Geological faults are related to an increase in weathering and loosening up of the surrounding rock, which causes an increase in hydraulic routing. This lowers the rigidity of the rock and increases the risk for constructing new buildings. In the event of an earthquake, even dislocations are possible along the fault. Seismic refraction measurements enable the mapping of seismic velocities and related material properties. The lateral variations of these velocities then indicate the location of fault zones.

Example:
A seismic refraction survey was conducted in the planning phase of a pumped-storage hydroelectric station to determine the geology of the planned upper and lower reservoir, as well to find indications of suspected fault zones.

Seismic velocity distribution of the underground and potential fault zones

High resolution seismic tomography is a well suited method to conduct a detailed geological exploration in a complex and highly varying environment. Tomography is used complementary to drilling boreholes, as the informative value of drilling often does not extend much further than the borehole itself.

Example 1:
The near surface conditions at three planned wind turbine sites, which were located in an area of leachable karst formation, were investigated. As filled and collapsed cavities were expected, a tomography survey was supposed to conduct between two boreholes. The resulting tomogram enabled the delineation of significantly low velocity zones, which indicate a disaggregation or loosening of the rock. 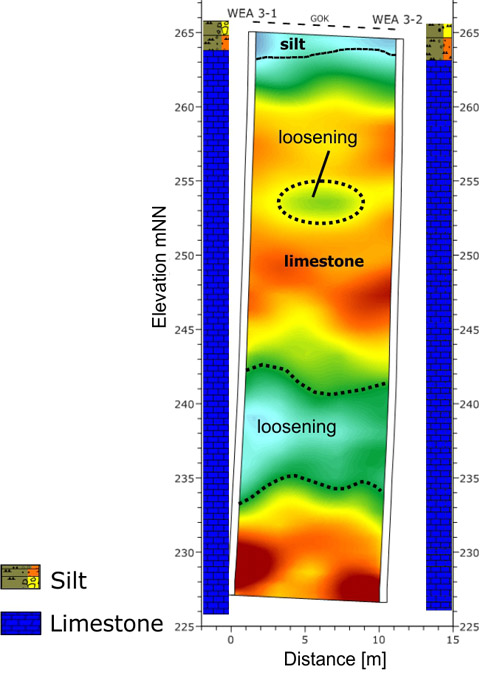 Example 2:
In the course of relocating a main road the construction of a viaduct was planned. Drillings shows high lateral variability of the subsoil within the relevant foundation depth. Seismic tomography was conducted using an inclined borehole to investigate the underground structures. Seismic waves were excited at points along the surface and received in the inclined borehole. In addition, seismic refraction measurements were carried out to improve the resolution in the near-surface region.

Seismic refraction is well suited for delineating material properties of the subsurface, such as seismic velocities. The obtained seismic velocities indicate the depth to bedrock and the associated bedrock topography variations.

Example:
A seismic refraction survey was conducted at a planned flood control basin. The depth to bedrock and the bedrock topography were delineated to determine the required anchoring depth of the basin. The results enabled a subsurface characterization into three layers of different material properties, based on geological and weathering interfaces.

Reflection seismic is used to acquire a 2D or 3D image of P- or S-wave reflections as a function of depth. The seismic waves travel through the subsurface and are reflected and diffracted at boundaries with an acoustic impedance contrast. The acquired data can be used for the evaluation of the lateral continuity of geological layers, which will be associated with reflectors.

Example:
In the course of a groundwater remediation a reflection seismic survey was carried out to investigate the continuity of the impermeable layer horizont and its thickness. The seismic reflection results show in combination with borehole informationan an interruption of the horizont in the first seismogram which might lead to a progressing of the groundwater contamination. The second seismogram indicates a more or less continuous clay layer.